Off the coast of Dubrovnik, Lokrum Island is a mysteriously romantic location, brimming with peace and tranquillity. From the abandoned Benedictine monastery and botanical gardens to the white sandy beaches, it is a beautiful hide-away. 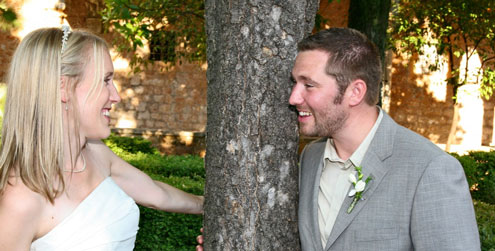 Ben and Becky have always been keen on travelling and seeing new countries. In fact, they actually met in a train station in Split, Croatia. A chance meeting led to a week of travelling around Eastern Europe and like they say, the rest is history.

The pair couldn’t decide where to get married in England and realised that a traditional English service just wouldn’t have been a true reflection of their loves and personalities. “As we met in Croatia we thought it would be fitting to go back there.” Becky said. Ben suggested Dubrovnik since it was a place that they both really enjoyed from the first trip they shared.

An Island to Themselves

Surrounded by the deep blue sea, the lush forest of Lokrum island rests a fifteen minute boat ride from the Old Town of Dubrovnik. Becky wore a simple cream strapless dress that fluttered slightly in the breeze as she sailed to her wedding accompanied by her father and bridesmaids.  A violinist and a guitarist provided peaceful background music at the wedding site and guests waited for the ceremony to begin by hunting for thank you cards the couple had hidden in the trees.

The short and sweet civil ceremony was conducted in Croatian and translated into English. After Ben and Becky exchanged vows, the group had drinks and aperitifs on the island before coming back on the boat together. The newly weds and wedding party stopped to take photos in Dubrovnik’s Old Town and then walked to the reception site. Becky said, “It was surreal walking back through the Old Town as we felt like celebrities with random people taking our photos and clapping and cheering, even though they didn’t know us. There was such a “fun” atmosphere around the Old Town.”

Lovely Inside and Out

Overlooking the island where they were just married, Ben and Becky treated their guests to dinner and dancing at the Taverna Rustica, a cosy restaurant in the 5-star Hotel Excelsior. Tea lights sparkled on cream tables accented with chocolate brown runners and stylish glass fish bowl vases wrapped on the inside with long green grass leaves had a single large lily placed in the centre. As favours, the couple used old-fashioned jelly heart sweets for the ladies and larger tops for the men which were put in transparent cones which they brought from England.

Guests were served pre-dinner drinks on one of the two terraces overlooking Old Town Dubrovnik and then the wedding party joined them for a gourmet meal inside. Becky shared, “even though we had use of the whole restaurant, we stayed on the two terraces for most of the evening.”  With music from the Martini Dry Jazz Band, the happy ensemble enjoyed a meal with traditional speeches and then proceeded to get up and dance.

Even though they went abroad for their wedding, Ben and Becky still managed to integrate old traditions and introduce new rituals. Becky wore her grandma’s dainty pearl necklace, which her granddad had bought for her when she was 16 and the couple danced to Stevie Wonder’s “You are the Sunshine of my Life” in memory of Ben’s late father.

Becky’s mum has made wedding cakes for years but wasn’t able to make one for her daughter since the wedding was in Croatia.  Instead, she found a reading called The Perfect Wedding Cake which talks about the ingredients needed for a successful marriage. With a little planning, the couple was able to create a personalised wedding and reception that ended up being more meaningful than if they had held their wedding at home. 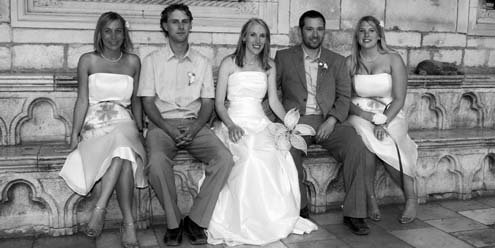 Such a Relaxed Day

Becky realised, “It would have been more stressful and more expensive to get married in England. Our number of guests would have probably quadrupled and I would have had to take much more of an active role in the preparation for the wedding which I didn’t want to do.”

By choosing Nina Bos as their wedding planner, the couple was able to relax and enjoy their wedding. Many of the guests will always remember the peaceful nature of their wedding venue and are thrilled to have visited Croatia. Becky is certain she made the right decisions in planning her wedding. “If I could do it all over again I would still get married abroad!”

A Russian and Indian Wedding in Dubrovnik.