There’s something about African game reserves. They have a powerful, almost menacing peace about them, with an air so thick and fragrant you can almost swim through it

In the Masai Mara, with its constant soundtrack of unknown creatures in the woodland, the vast plains stretch away from you on all sides, sweeping out towards the Serengeti. This is the home of Karen Blixen, who “had a farm in Africa, at the foot of the Ngong Hills” a million miles away from any Caribbean Beach or European Hotel. Which, in the eyes of Leanne & Wayne, made it the perfect wedding destination.

“We got married in the middle of the Masai Mara, overlooking the river with the most stunning sunset I have ever seen”, described Leanne. So how did the couple decide on this unusual destination? “We knew we wanted a wedding that was special to us, and not just about what our families wanted”, explained Leanne. “We also wanted somewhere private and peaceful”. Eventually, after searching high and low, they came across the Governor’s Camp in Il Moran, home of BBC’s Big Cat Diary, and the decision was made.

With a tour operator to arrange all the bureaucracy such as the legal paperwork and travel details, Leanne was able to relax and plan the finer details in her own time, liaising with the Camp over the meal, flowers, photographer and ceremony site. Although apprehensive about holding the wedding in an unknown destination, the couple found the overall experience stress-free, and were excited at the prospect of discovering the location together at such a special and romantic time.

Under a Shady Marquee

On the morning of their wedding the bride and groom spent their time, rather unusually, on a game drive, before returning to the Camp to have lunch and prepare for the ceremony. At 4pm and according to local tradition, Leanne was met by a couple from the Masai tribe, who escorted her to the ceremony site in a decorated jeep, to where Wayne was waiting for her under their shady marquee.

The proceedings, which were held next to the Masai River in front of their five guests and the staff of Il Moran, also incorporated Masai culture and tradition; the tribe attending the wedding sang as Leanne walked down the aisle, and as the ceremony started the bride and groom sat separately at opposite sides of a table, while the wedding party introduced themselves. The couple then read their pre-approved wedding vows to each other. “It was very emotional”, said Leanne. “After we’d made our vows and after a lot of tears, I swapped places with the best man and took my place by Wayne’s side as his new wife. Then we shared our first kiss”.

Once the ceremony had taken place, a beautiful table was set up for the reception, and as soon as darkness started to fall a large fire was lit, and private chefs started preparing a huge selection of different foods for the meal. “Our wedding cake made us chuckle”, said Leanne. “The Camp had arranged it for us – it was a two tier cake, with ‘Leanne weds Wayne’ written on it”.

As the reception progressed and night fell, the guests looked out over the African plains as hippos, elephants, baboons and giraffes arrived to drink at the Masai River opposite, and perhaps even to watch the celebrations taking place in the bright, dancing firelight.

A full reception had been arranged for their return to the UK, so the couple decided to forgo the traditional events such as speeches and dancing until then. “We were too relaxed and happy for all that” said Leanne.

And the music? “No”, Leanne laughed. “We had all the music we needed in the sounds of the Great Outdoors”. 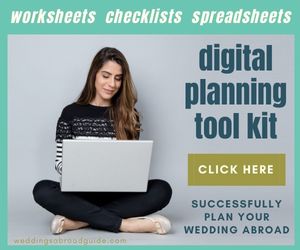